There seems to be an invasion going on and although it doesn’t get as much media coverage as illegal immigration along the Mexican border or the stream of refugees pouring into Europe from the Middle East, it still may have a racial component to it as it tugs at the traditional values of both Western men and the Asian Culture. What we are witnessing is a sudden increase in Western men with Asian girlfriends. This article may serve, tongue-in-cheek, as the white man’s guide to dating Asian women.

Now many of you may feel that there is nothing unusual going on, but there are things happening that are slipping under the radar. The average Chinese guy in recent years has become very industrious and goal oriented. This has led to severe limitations on his time, much to the dismay of Asian Girls everywhere. Although common language and Asian culture should allow for better communication and less misunderstandings, the average Chinese guy is losing in the dating arena to Western men who have suddenly grown quite fond of having an Asian Girlfriend. 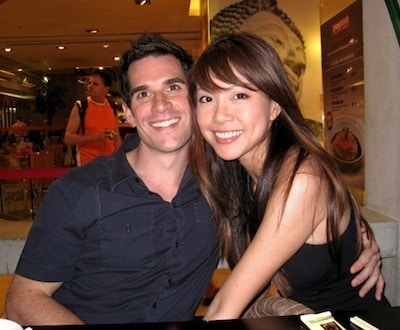 There is much debate as to the cause of this steady increase in Western men dating Asian women, but research shows that it can be traced back to Chinese food and the surge of Oriental restaurants opening up in North America and Europe. This has nothing to do with an interest in Asian culture or even rebellion against traditional values. In reality it is actually a massive conspiracy orchestrated by cute Asian women using their unique and appealing cuisine in order to get Western girls fat on Chinese food and then capitalizing on Western men’s preference for slim women.

The cunning mind of the Asian girl is well documented in some James Bond movies and in many volumes of those mainstays of educational literature, the graphic novel. Average Western men are thought of as freewheeling and fun compared to the average Chinese guy in the eyes of cute Asian women. Despite the common language and Eastern Values, Asian girls have set their collective sights on Western men.

More debatable proof of this ingenious plan for getting Western girls fat on Chinese Food can be established by the fact that on most of the main Western Holidays such as Christmas Eve, it is only the Oriental Restaurants that remain open. A coincidence? Or part of a master plan to make the European and American girl’s undesirable causing Western men to crave an Asian girlfriend who may be slimmer and more exotic?

This article may erroneously be the definitive White man’s guide to dating Asian women, but it can also assist in killing a few minutes of time sitting on the toilet with your tablet, but for me writing this article was just an effort to keep me awake for another hour or so until the last few drops of Courvoisier have been consumed and I can go to bed. My apologies to the Average Chinese guy, Asian girl or anyone else that may have been offended by the ramblings of a sleep deprived writer with severe ADHD. So that is it for the White Man’s guide to dating Asian women, god help us all!

« Previous post
Dating Success: What To Say In A First Message
Next post »
When Women Say No To Sex Do They Really Mean Yes